Istria to Trieste to Bohinj!

Last week my old buddy Owen came to visit! We spent five days relaxing on the Istrian coast, people watching along the narrow stone streets, enjoying the local beer, wine and brandy, and exploring the nearby hillside towns. We then headed up to Trieste, Italy for a day where we parted ways. I for the Julian Alps in Slovenia, and Owen for Mallorca, Spain.

I am now in the super charming mountain village of Bohinj Bistrica, enjoying a cup of coffee and waiting for the fog to lift before heading out for a 3 – 4 day hut to hut trip in the surrounding mountains, including a hike up Mt. Triglov, Slovenia’s highest peak.

My bike ride from Trieste to here was one of the most incredible of this trip.

Trieste is a grand and bustling Italian city. It has a hip vibe, lots of young people, diversity, incredible architecture and culture and has a very real feel. For a seaside town, it is surprisingly not heavily oriented towards tourists – so refreshing after a month on the coast of Croatia. The historical center is on the sea, and the city sprawls up the hillsides. Riding into Trieste and trying to navigate my way to the central piazza where Owen and I had arranged to meet was a challenge. At one point i even ended up on a freeway overpass! I got a great tour of the city, finally made it and treated myself to one of the best ice creams I have ever had.

Owen and I enjoyed the cafes, meandered through the streets and debated staying another day, but the next day I was pedaling north towards the hills.

Expecting steep switchbacks for the entire 150km to Bohinj, I was pleasantly surprised to enjoy one of the flattest days I had since riding in Austria! While I was indeed gaining altitude, the grades were so mellow i hardly noticed it. I rode around the contour of the coast and departing for the mountains I followed the Soca river valley into Slovenia. Watching the mountains slowly envelop me was awe inspiring. I must have looked like an idiot riding with a big mouth open smiling “wow” face as the scenery became more and more impressive. Cows grazing along the steep mountain slopes wearing giant cowbells (and goats wearing goat bells!), old women out for an evening stroll in their flower print dresses, rolled down nylons and cardigans, picture perfect old farm houses with geraniums cascading out of the windows, gnarled apple trees heavy with bright red apples and birds flitting from one tree to the next high above the valley floor simultaneously graced all of my senses.

Up and up I pedaled and 120km from Trieste, at 6:30pm, it got steep. I arrived after a serious 5km climb at a mountain hut (dom or koča in Slovene. Dom also means home) in Petrovo Brdo. Mountain doms have beds and serve food and drink, so all you need to bring is a sleeping bag and basic items when hiking in the mountains here – incredible! I was enthusiastically greeted by the smiling, handle bar moustached proprietor, Rudy, offered a congratulatory shot of plum brandy and showed my simple shared room with seven beds that I had all to myself for only 7€ a night. I changed into non-sweaty clothes, got settled, ordered a beer and Rudy brought me freshly popped popcorn. A drunk geezer who appeared to be missing most of his teeth rolled in jangling his car keys, ordered a beer and when told of my trip he crossed himself, laughed and laughed, called my crazy and bought me a beer. Rudy called up his friend from down the street who had just returned from a two week holiday in Alaska, he drove up the hill and we chatted about Alaska in broken English and he treated me to another beer. His son in law came over too. We hung out over yet another beer, shared stories and munched on popcorn before I retired to bed. What a welcome to The Alps!!!

The next morning started off with a 12km climb and then a long descent into Bohinj Bistrica. I arrived around 12:30 and had all day to explore as my CouchSurfing host wouldn’t be home from his job in Ljubljana until after 6:00. I rode my bike around the small town and into the next village, Brod, where I had my picnic lunch under a tree by a stream with mountains and apple trees to my left and quaint old homes to my right. I then powered up yet another steep hill into the upper valley where the bicycle mechanic lives (time for some routine maintenance and to fix my recurring slightly loose headset). He wasn’t home, so I pedaled onto Bohinj Lake about 10 more km down the road where I relaxed and enjoyed the blissful scenery before riding further along the lake and eventually turning around to come meet Sebastijan, my amazing host!

He lives on his family’s land in a beautifully remodeled flat that used to be part of the family run hotel. He grows fresh veggies and has plum and apple trees in his yard. I was treated to a welcome shot of plum brandy, fed his mother’s DELICIOUS pumpkin soup drizzled with pumpkin seed oil, accompanied by locally made sausage, Bohinkska Zaseka – smoked pork fat spread which is one of the more decadent and perfect things I have ever put on bread in my life, tomatoes from the garden, freshly baked bread and wonderful company. Ahhhhhhhhhh…

Yesterday I got a late start, did laundry in a washing machine (yes!!!!), drank coffee, enjoyed the view from Sebastijan’s balcony, and eventually made it out on a steep and dizzying hike up to Crno Jezero (Black Lake). Wow.

Today I’ll leave my bike behind and will explore the mountains on foot. Finally, this backpack that I have been lugging around on the back of my bike for three and a half months is getting put to use! 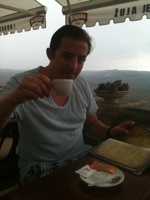 Drinking a beer in our hotel room 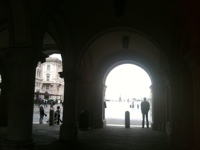 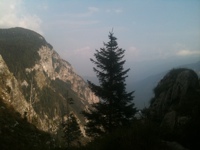 On the way down from my hike yesterday

One thought on “Istria to Trieste to Bohinj!”